Once the home of prize livestock, our old barn is now home to the Joseph F. Kemp Memorial Animal Sanctuary, housing animals too disabled or old to be productive. The cast of rescue animals who have lived here include two ancient donkeys, Izabella and Draco, who came to the farm via customers who had rescued them many years earlier after they were found wandering the streets of Brooklyn.   They came to the Sanctuary at the age of 26 and 27 respectively and lived out their final years together at the entrance of the old barn.  Everyone who knew them still misses Draco's exuberant braying each morning when he sensed the first person stirring on the farm and hoped to be the first to be fed - a constant optimist.

Henry and Floyd also occupied the old barn for a time.  Henry was a Jersey bull calf who lived for his first year at Nettle Meadow and went on to be a prolific stud at a dairy farm in Washington County.  Floyd was a small Alpine goat that had been dropped off at the farm when he was only a few months old.  He was frail and thin and experience strongly suggested that he would not be long for this world.  As he grew weaker and others picked on him he was put in a stall on his own.  One morning soon afterward it was discovered to everyone’s dismay that Floyd was not in his stall and that Henry had battered a large hole in the stall wall that Floyd had slipped through.  Everyone at the farm expected to find Floyd badly injured -- or worse -- at the hands of Henry, the rapidly maturing bull, but instead Henry was found sleeping with smiling Floyd curled up in the protective circle of his husky frame.  Henry remained Floyd's constant companion and protector during Floyd's short stay on this earth.

Knowing Nettle Meadow’s weakness for frail and sick farm animals, a local farm offered a young turkey who was constantly being picked on by the other turkeys on their farm.  She was adopted and it was soon discovered that she had been blinded in one eye and therefore had only limited vision.  She was named "Blinky"".  She was fed well and nursed back to strength but she was lonely.  Her lucky break came one day when a friend stopped by the same local farm for a free range chicken or a dozen eggs, and they were offered a larger turkey with limping gait and a crooked walk for Nettle Meadow’s sanctuary.  Named “Kinky” when he arrived at the farm, he and Blinky immediately became fast friends and lived out their days very happily together.

There are many other heartwarming stories of beloved animals in the old barn, including Patty the gigantic thoroughbred and her constant companion, Sadie, the ancient broken-down mare, but this gives you a flavor for some of the creatures that have found shelter in the wonderful old barn. 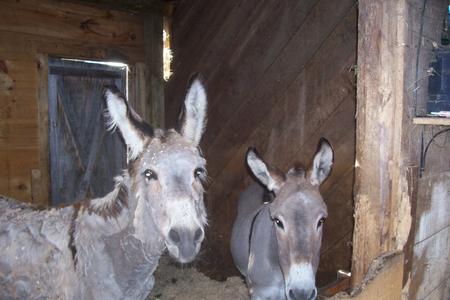 Here are stories of just some of the animals helped at our sanctuary over the years.  Coming SOon we will have a full list of our current residents! 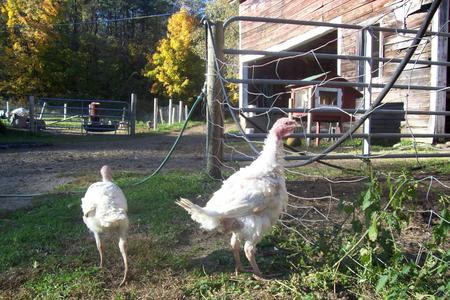